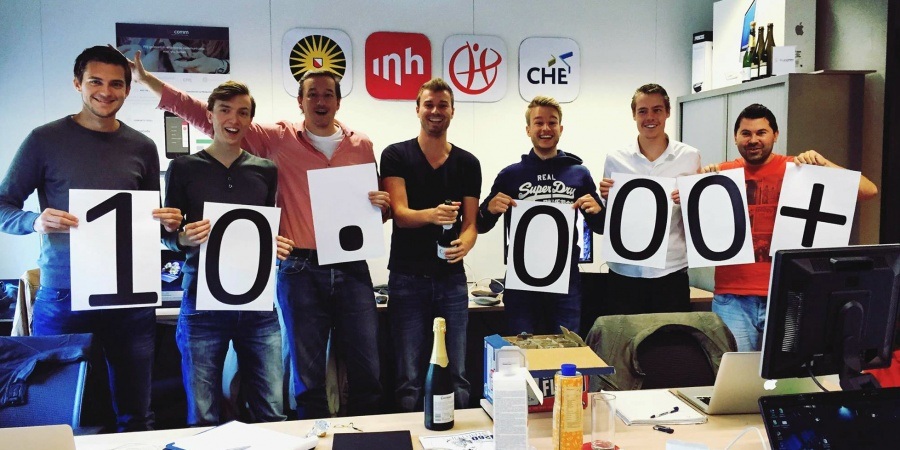 This is the story of why thousands of students use the StuComm StudentsApp four to five times a day. Why the number of downloads takes huge proportions when it islaunched in the App Store and Play Store. Let me take you back in time…

It all started with the conceptualization of the idea to help educational institutions inform their students effectively. This light-bulb moment was the beginning of the StudentsApp from StuComm. Skilled members were added to the team, whereas the product was being fine-tuned. This process resulted into several contracts with educational institutions, including Hogeschool Inholland.

Whether a partnership becomes successful depends on several factors. Among them are dedication and enthusiasm. These factors are definitely present in the partnership with Hogeschool Inholland. A dedicated team of StuComm is giving it their best in order to assure that the StudentsApp is becoming a success among the students, as well as an enthusiastic Hogeschool Inholland team who are very excited about the app.

However, students also have to be excited about the app. We co-created with students, in order to assure that the students are just as enthusiastic about the app as we are. We’ve received some very interesting insights from students, which we all evaluated and considered for the app. This resulted in an app that was approved by StuComm, Hogeschool Inholland, and the students. However, we’re always improving and stabilizing our app. Therefore, we’ll keep co-creating with students.

The next step in the partnership is launching the app in the App Store and Play Store. When doing so, students have to be aware of the fact that the app is available in the App Store and Play Store. First-year students received a newsletter with an announcement of the MijnInholland app. The remainder of the students had to be approached in another way. That’s why we’ve launched a marketing campaign to activate the students to use the app.

The goal of the marketing campaign was to create awareness, so that students would download the app. A couple thousand flyers and some banners were used to create awareness among the students. Nine Hogeschool Inholland locations were visited during four days. This campaign can be described as a huge success!

The number of users of the MijnInholland app rose by 10.000, in only four days!

Communicating that the app contains all the necessary information a students needs, evokes very positive reactions from the students. They simply love the possibility to check their study results and timetable in the blink of an eye. In addition, the app is totally free for students.

The increasing number of downloads does not stop after the marketing campaign; the rise in downloads keeps on going. Subsequently, StuComm does not stop either. StuComm keeps on improving the StudentsApp and keeps on activating students. This is only the beginning!